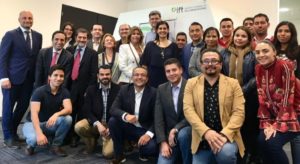 The Dynamic Spectrum Alliance has a far-reaching global presence, with members situated around the world. Therefore, as President, part of my role is to attend key spectrum events worldwide to support fundamental dynamic spectrum sharing solutions which will connect those in rural areas to the internet, along with supporting next-generation technologies.

At the start of September, I attended ANDICOM 2019 in Cartagena, Colombia for three days, which hosted 2,800 visitors from 25 countries. At the event, we enjoyed a high-level academic agenda that allowed participants to share knowledge on technological issues that define the spectrum sharing industry. It was a great opportunity to meet with companies and experts that are interested in dynamic spectrum access.

During the month, I was also pleased to attend the Microsoft Airband Summit in Redmond, Washington. I sat on a panel that focused on “Working with Governments and Regulators to Bridge the Digital Divide” and had a great discussion with Claude Aiken from WISPA, Dudu Mkhwanazi from Project Isizwe, along with Paula Boyd and Jeffrey Yan from Microsoft. On a broader note, it was great to see an overview of the Microsoft Airband Initiative which continually makes progress in eliminating the broadband gap in numerous countries, including India, Kenya, Ghana and the United States.

Later in the month I attended the 9th Annual International Congress to speak on Spectrum for Sustainable Development in Colombia, organized by the Colombian National Spectrum Agency (ANE). I joined Veena Rawat from GSMA, Carlos Rebellón from Intel, Celedonio von Wuthenau from Nokia and Juan Ignacio Crosta from BlueNote to discuss the dynamic use and sharing of spectrum in the growing 5G world. The congress was a success and a good opportunity to learn, strengthen relationships with regulators and industry experts as well as discuss with them the importance of spectrum sharing.

I then travelled to Lima, Peru to attend the 6th Annual Latin Americas Spectrum Management Conference. This event highlighted the importance of connecting people in the most remote and underserved areas and how the entire population can take advantage of new technologies to close the digital divide. At the event we were also presented with the opportunity to meet with regulators to advance the development of dynamic spectrum sharing technology in the Latin American region.

Whilst in Lima I attended a ChicasTIC meeting, which strives to empower Latin American women who work in technology. ChicasTIC is a network of women in LatAm promoting female leadership in the ICT sector and I was glad to see that many women who attended the conference joined our group.

After the conference I continued in Lima, participating in a workshop on Community Networks. On the panel I was joined by Fernando Carrillo from Echostar, Nadia Villegas from the MTC and Peter Bloom from Rhizomatica in an informative discussion moderated by ITU’s Director of Radiocommunication Bureau, Mario Maniewicz. The session focused on alternative methods for the use of radio spectrum in underserved areas.

The 24th September marked the opening of the 8th Annual Americas Spectrum Management Conference in Washington D.C. The two-day conference began with a welcome from the Federal Communications Commission (FCC) Chairman Ajit Pai, where he reiterated the FCC’s intent to make the 6 GHz spectrum band available to Wi-Fi and other unlicensed uses.

In September I was also invited to deliver a training course session for the United States Telecommunications Training Institute (USTTI), an innovative program exploring emerging technologies and spectrum management. Whilst in Washington, I was invited to a reception ceremony to honour the 10,000th USTTI Graduate! The graduate was Irene Ogake from Kenya and it was a pleasure to congratulate her. I am convinced that the USTTI is doing a great job.

For my final meeting of September, I travelled to Mexico City where the DSA co-organized a workshop to discuss Mexico’s adoption of TV White Space (TVWS) technology. In addition to the workshop, the DSA attended important meetings with various Mexican authorities including the Secretaria de Comunicaciones y Transportes (SCT), the Instituto Federal de Telecomunicaciones (IFT) and the delegates from the Presidency of the Republic leading the discussion on connectivity issues.

My involvement in these important spectrum sharing events across North and South America has been a great opportunity to connect with Spectrum Authorities, DSA members and other key industry experts to work towards closing the digital divide for the remaining 4 billion people. I would like to thank all of the DSA members that joined us in our meetings this September, and to the great team of experts that support the DSA’s ambition of global connectivity.